After visiting Silverton we decided to visit Pro Hart’s gallery in Broken Hill. I am not a particularly enthusiastic art viewer – I know that it has been said before, ‘I know what I like’, but I don’t always understand what I am viewing. The gallery is well laid out over three levels. Many of the paintings had a description alongside, which helped the viewer (me) to understand what the artist was thinking as he painted. The Australian picnic or race meeting were easy to understand, but each one took time to study the full detail. He painted many pictures of ants.
Coming from Broken Hill he would have had a great deal of experience with ants and other insects. Dragon flies were also popular with this artist.
I have read that he approached a tattoo artist to have ants tattooed across his feet, but it never happened due to his illness, he died in 2006 at the age of 77 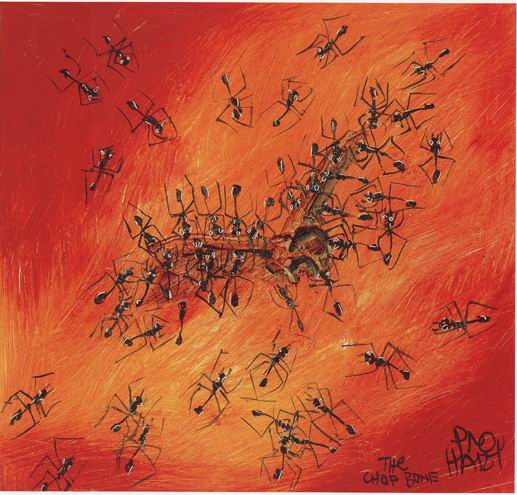 Called the ‘chop bone’ – look closely at the centre.

During our visit to the gallery we watched a short video of his life and his work, which I found interesting, considering that I knew very little of the artist, except that he was Australian, from Broken Hill and created a famous advert for Stainmaster carpet in the 1980s. (Click the link for the 29 second ad)
At the entrance to the gallery we saw his 1973 Silver Shadow Rolls Royce, which he’d repainted with Australian historical scenes.

The day was an arty day because our next stop was Jack Absalom’s gallery, a short drive from Pro Hart’s gallery.

Jack Absalom’s gallery is part of his home (click on the link to see his paintings). We walked up the path and read the notice on the door – if locked ring bell – if unlocked come in.
It was locked so we rang the bell and an elderly lady came to the door and invited us in to the gallery area. As you see the centre display contains jewellery, and one of the finest displays of Australian opals.

As we entered the gallery we were left alone to view the paintings. For me, Jack Absalom’s paintings capture the great expanse and feel of outback Australia.

The colour of the floor was carefully thought out to fit with the overall ambiance of the gallery, and the lighting is such that it doesn’t show a shadow. I felt that I could stand and ‘drink in’ the views, feel the heat and smell the bush.

As well as being an artist specialising in the outback, he is also an author – Outback Cooking, Safe Outback Travel to name two. At the age of fifteen he was a professional kangaroo shooter.

We were viewing the paintings when an elderly man came in to the gallery from the private home area, and stood at the counter under Jack Absalom’s portrait. It was then that I realised that it was Jack Absalom himself.

As Maureen and I were the only people in the gallery it didn’t take long before we were in conversation with the artist. I’d picked up a book about his life and his painting and had it in my hand as we spoke. I offered the cash for the book, which he accepted and also took the book and signed it for me. He was telling us that he would be off again to the bush to paint. He expected to be away for several weeks and would be living in the bush – not bad for an 88 year old. He did comment that he had to keep painting in the bush, while he was still young enough to get about  . . .

This is the portrait of Jack Absalom, painted by Cynthia Dowler, I think it was painted in the early 90’s, so at the time he would have been in his mid-60’s. It now hangs in the Jack Absalom’s gallery.

With hindsight I should have taken his photo with Maureen. Aren’t we all wise after the event?

It had been a long day from mines to film sets and art galleries and it was time for home and a relaxing drop.

Having our drinks on the balcony allowed us to watch the traffic passing, not that there was a lot of traffic after 5.00 pm, but we always received a wave from the passengers in the tourist buses. Perhaps we looked like locals  . . . .