We sailed from Thailand for Vietnam’s southern main port of Ho Cha Minh (used to be called Saigon), and once again we couldn’t get too close to Ho Cha Minh city because of our size. We berthed at Phu My, which is a 90 minute drive from Ho Cha Minh city via the fleet of buses waiting for us.

This time I took more care of dashing from the cabin to the balcony and the sudden change of humidity. Phu My is a ‘working’ port and it brought back memories of my time at sea in the ’60s. 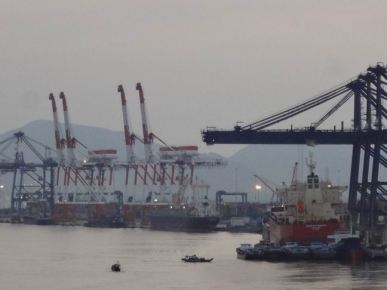 Just before sunrise as we approached our berth. 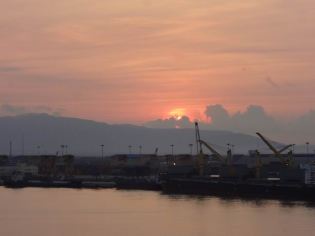 The start of a new day. 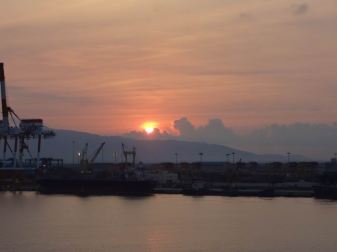 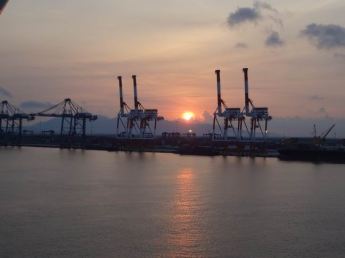 The ‘giraffes’ have woken up, and are watching us arrive. 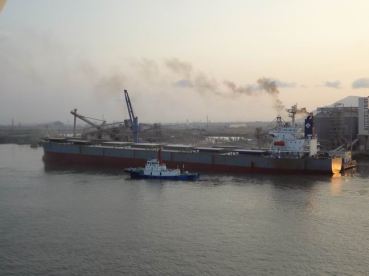 The port is waking. 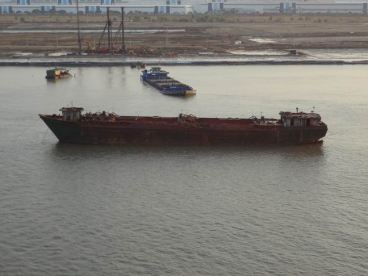 A local barge waiting to go alongside. 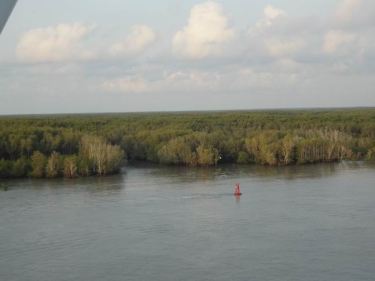 As we swing around in the middle of the river to face seaward for our departure I notice that the opposite bank is undeveloped. Using the ship’s thrusters we are able to turn on a sixpence (five cents for the younger readers) without the help of tugs that stood by just in case. 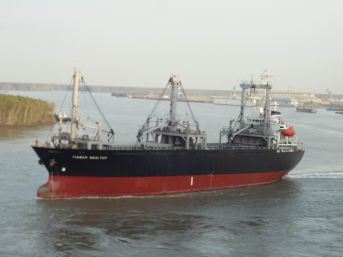 While we turned in the river I watched a ship coming down stream and getting closer and closer (I took a set off pictures just in case), as she rounded the bend in the river she gave a long blast on her whistle and altered course to starboard to pass down our starboard side as we had completed our turn. The one long blast is the international signal that a ship is altering course to starboard so that everyone in the area is aware of that vessel’s movements.

Because my wife and I had been to Ho Cha Minh during a previous holiday we did not return to that city on this trip. The local council offered a free shuttle service from the ship to the local town.

After we left Phu My on our way to Singapore I noticed the high number of local fishing boats, which brought the title of this blog home to me. 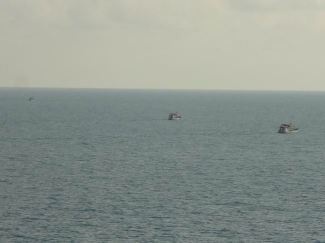 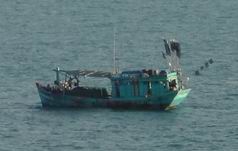 The sea was calm, the Diamond Princess had 2900 privileged passengers who dressed for dinner, while those fishermen that we past hung their washing on a long rod attached to the stern of their homes.

I wondered what they would do if the weather changed for the worse – I doubt that we would feel the change. Our twenty seven foot stabilisers would help keep our 115,000 gt vessel steady, so as not to upset the fortunate passengers.

The following day we arrived in Singapore, just before dawn. 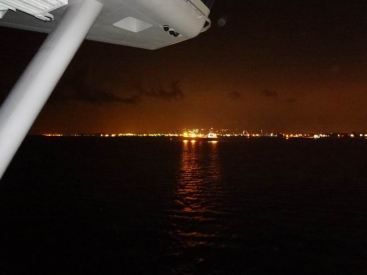