I heard on the grapevine that a certain bar that I used to frequent in the 1960’s, in Georgetown, Penang, was still in existence.

My wife and I and two other couples were passing through Penang, so I had to try and find my piece of yesterday. The bar was (is) called The Hong Kong Bar and it was favourite watering hole for many a service man based in Malaya and later Malaysia. My first visit would have been in 1963 when I sailed in a cargo ship.

As I turned in to the street I recognised the area and at once became the boring old guy bending my two male colleagues’ ears about life well before PC and the Nanny State of today.

The street in which the Hong Kong Bar is located. 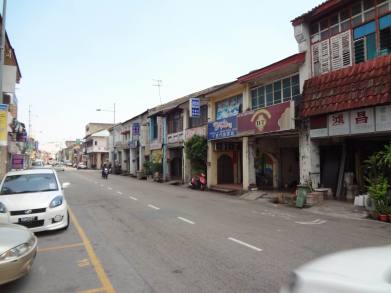 As I walked in a realised that someone else was on a memory trip. An Australian serviceman and his wife. He was here to do the same thing that I was about to do – lean on the bar and drink in the atmosphere over a glass of Tiger beer.

The reason I thought the bar had closed is that I’d heard of the fire in the early 1970’s, but the owner had rescued the regimental shields, ships’ crests and air force insignia after the fire and remounted them in their old places around the refurbished bar.

The column of paper consisted of cash notes from many countries around the world. The bar owner must have been able to rescue this part of the bar decoration from the fire, because I saw old English money that went of of circulation in the early sixties. 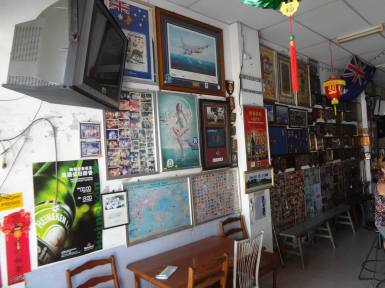 A lady, (in purple) who can just be seen in an earlier photo served me my beer, and soon afterwards the gentleman in yellow came out of the back area and I had the feeling of deja vue, because I thought I recognised him from the 60’s. After a short conversation I realised that this gentleman was the son of the man that I knew, the original owner.

The same family had owned the bar since the mid fifties and they used to collect photographs of their customers. When I asked if they still had the photographs several large albums where placed on the bar. As I scrolled through them looking for a familiar face I realised that the pictures from the mid 50’s through my period in the 60’s had been lost in the fire.

My recent visit took place in the late morning, which was a first considering that we used to be going back to the ship around breakfast time.

But at nineteen one had stamina  :-o)