Check the pronunciation of Budapest – it ends as ‘pesht’ not ‘pest’.

On arrival at Budapest station from Prague we had to buy our onward tickets to Vienna. I’d tried to buy them over the internet, but Hungary’s rail system would not allow this to happen. We found the office for international tickets and entered, only to be greeted by a packed booking section. Every nationality you could think of seemed to be hanging around waiting for a free window. I looked around and realised that I had to take a ticket from a machine to secure a place in the queue. My number was 502 and the flashing light board was calling for 470. It was going to be a long afternoon.
My friend returned to our wives and warned them that it was going to be a long wait. We didn’t wish to go to the hotel, and then have to come back the following day, because this would have used up too much time. After about forty-five minutes my number was called and I was able to speak to a very helpful lady, even though my Hungarian was nil, and her English was intermittent. Eventually I understood that she wanted to sell me a return ticket to Vienna, when I only wanted a single. After a bit more broken chat and sign language I grasped that the return ticket was much cheaper than the single, so I was quite happy to buy the return. This lady saved us enough money to pay for our evening meal! Now that’s customer service.

In Budapest we stayed at the Hotel Victoria overlooking the Danube – what more could one ask? 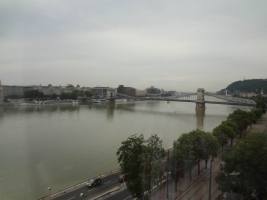 These two pictures show the view from our bedroom window –

We had a good size room – picture window over looking the River Danube where we could see the Chain bridge and the Parliament building. The breakfasts in the small dining room were good and the hotel offered plenty of choice, and eggs to order. In the evening we were offered a happy hour system based on buy one – get one free from 5.30 to 6.30 pm, which we used before heading out for our evening meal. They also offer free wi-fi, and I never had a problem with signal strength on the seventh floor.

Like Prague we found that Budapest was easy to get round so we just walked everywhere. We did do a ‘free’ walk – donate what amount you think the walk was worth at the end. It was an interesting three hours and we ended up at the ‘castle’ at the top. The castle is more a large house where the President lives rather than a castle as in the Welsh or English castles. The guide was entertaining as well as being educational. He was well worth his money. The tour ended in the basement area of the Hilton Hotel. When they excavated for the hotel’s foundations they discovered an old church, which walls have been incorporated into the Hilton area.

The guide outside where the President lives and in the basement of the Hilton Hotel just before the end of the tour, you can see the old wall of the church.

This is not Disney Land, but the Fisherman’s Bastion. The name is taken from the guild of fishermen who defended this area in the middle ages. From this area you have a spectacular view of the city and the river. 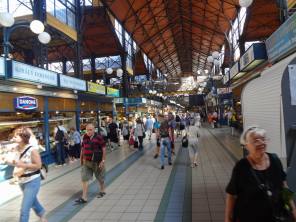 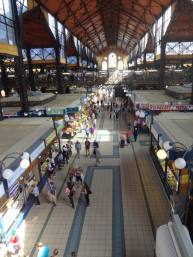 The local market in Budapest has been voted as the best market in Europe for 2013, I would argue that point, but it was still interesting to visit. We bought a few items, but overall we found this market to be expensive. It was much more expensive than Prague.

The following day we decided to visit the Hero’s Square and worked it out that it was too far to walk, so we would go by train. We bought the tickets and saw that a train was about to leave so hurried and caught it just as the doors were about to close. We checked the map on the train wall and decided that we were on the correct train. It took us a couple of station before we realised that we were on the wrong train, and we were on our way to a country area. The local station where we alighted from the train was a quiet station, where the public crossed the railway line to gain access to the train going the other way. Unacceptable in many stations so close to major cities in Australia – but when in Rome. 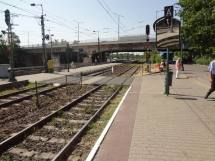 On returning to our starting point we had to buy new tickets because the tickets we purchased had already been validated and the guard would not allow us back in to the system. There wasn’t one guard at the top of the escalators, but three arm waving guards blocking our way. We’d boarded a country train instead of a metro. A simple mistake because the ticket seller had waved us to the appropriate platform, and as all the platforms were underground, we thought we had boarded the metro system. The metro system was further underground which we only realised after we’d bought our second set of tickets for the trip. Education can be expensive . . .
We eventually reached our destination. 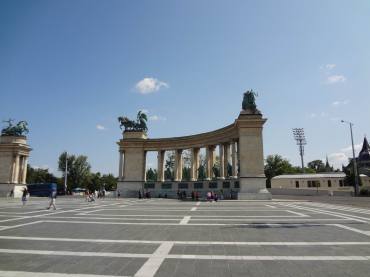 It was an impressive square come plaza. The square was created at the end of the 19th century to commemorate the 1000th anniversary of the Magyar conquest of Hungary in 895AD.

At the centre of the square is the Millennium Monument – designed in 1894, but not completed for another 35 years. Around the base of the monument are equestrian statues honouring the chieftains of the seven Hungarian tribes who conquered the area now known as Hungary. The figure at the top of the column is the Archangel Gabriel with his trumpet.

We walked back to the city centre along a single very interesting street.

After lunch in the city we took a short cruise around Margaret Island. Along the Pest bank we saw a number of river cruise boats.

On our third night the phone rang at midnight and we were warned that a 50 kilo World War Two bomb had been found not far from the hotel. We were informed that the police had visited two hotels, the Victoria being one of them, and that we had to be out of the hotel by 7.00 am as a precaution, before the bomb squad could begin their work. Breakfast would be served from 5.30 am instead of the normal time of 7.00 am. We were not allowed back until 3 pm, after the all clear had been given. On returning, the hotel management gave us a bottle of wine as a ‘thank you’ for our cooperation. A very nice gesture considering that the incident had nothing to do with the hotel, and they didn’t have as choice, but to evacuate everyone. Our location was the Buda side of the river, close to restaurants and bars. We found this side of the river to be a little cheaper than the more popular Pest side. The Victoria is located a short stroll from the Chain Bridge, so visiting Pest was good for our daily exercise as we crossed the river via this bridge. If we return to Budapest we wouldn’t have any hesitation in booking the Victoria again.

We left the hotel at 7.00 am during the bomb scare and walked across the bridge to the Pest side of the Danube and turned left along the riverbank. We were looking for an unusual monument.

Looking back across the river to our hotel area in the Buda.

The above pictures are of the memorial that honours the Jews who were killed by Arrow Cross militiamen during WW2. The Jews were ordered to remove their shoes, and were then shot so that their bodies fell in to the water and were carried away by the river flow. The shoes today are iron shoes in the style of the 1940s and they have been attached to the embankment. A very moving experience to stand and watch the river flow past the shoes, while your mind tries to visualise the horrors of  the war years.

We had four nights, and three very pleasant days in Budapest, a city well worth visiting. I’d go back in a flash if getting there wasn’t so expensive from Australia.

Night time views from outside our hotel.

Next, it was all aboard for another train ride, but this time to Vienna. 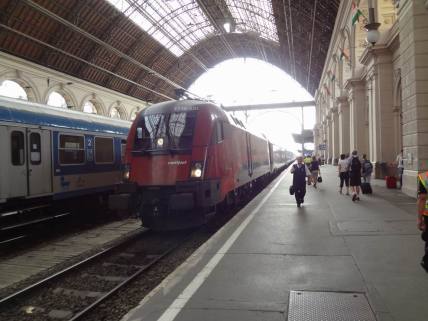 Budapest station and our train arriving

It was a short drive from the hotel to the main train station where a porter enquired of our destination and class of travel.
On learning that we were first class he showed us to the special lounge and pointed out the refreshments.
Later, as the train approached the same porter entered the lounge and asked us to follow him.

The porter showed us to our carriage and loaded our bags in to the storage area. He made sure we were in our correct seats and turned to leave. At no time had he indicated that he was doing anything but his job, and seemed surprised and pleased when he received a gratuity. To say I was impressed is an understatement, when all of the bars and restaurants point out that service charge is included or not included and tell you how much they expect (as a percentage) as a tip, even if the service is lousy. Our porter was a fine example of a man offering excellent service for the wage that he was paid.

First Class coach Budapest to Vienna – we had a table for four.