All to soon we had to leave Berlin for Prague – again by train, and again I booked first class seats over the internet, via the German booking system, but on Czech rail – I had no end of trouble trying to book on the Czech system.

Only after I had paid for the tickets, via the German system, did I realise that Czech rail had a higher travelling class than First Class, called Business Class!
Who in their right mind would offer a business class service higher than first class? Let’s just say that Czech Rail First Class was not as comfortable as the Frankfurt to Berlin trip, and I am being polite. 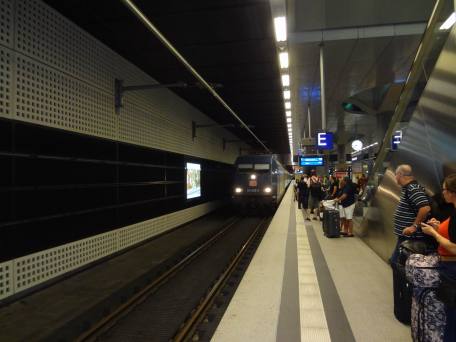 The 8.46 am train from platform one at Berlin’s mainline station was a huge change from the German rail first class service.

We had four seats in a compartment for six, that required us to use the corridor to change our minds.

The six-seater compartment wouldn’t have been too bad, if there had only been the four of us. Unfortunately the remaining two seats were also occupied.
With our four large suitcases – we struggled to put two suitcases on the overhead racking system – the red bags in the pictures below. We held some of our hand baggage on our knees, because the available floor space was required for our remaining suitcases, plus one of the third couple’s suitcases, so once this was completed we were unable to move our legs or feet. This was not going to make for a comfortable  five-hour journey. I hate to think what it was like in economy, because every First Class and economy class compartment was packed with holidaymakers. 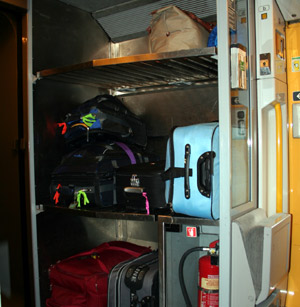 Unlike the French TVG trains and the German ICE trains, which have special stowage areas for suitcase and bags (see picture left) our Czech train only had the overhead netted area, which is usually only for hand baggage. Plus the Czech train was a corridor / compartment train, compared to the German open plan layout.

After we left Berlin, and settled down (after a fashion) for the journey, we, like many others, moved our suitcases in to the corridor, which caused problems for people passing along to the buffet car. The corridor, being packed with suitcases, haversacks, cardboard boxes etc discouraged people from using the buffet car, because people didn’t fancy an obstacle course to get to the buffet and then have to retrace their steps carrying food and drink. 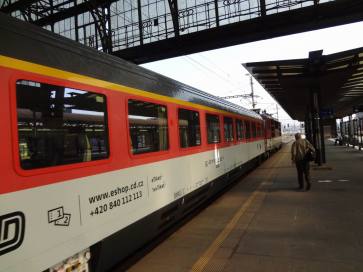 To be fair the Czech train was very well maintained, clean and without the large volume of baggage, the journey would have been very pleasant.

Had to try for a picture of Usti nad Labem – what a town with a history. It is positioned just inside the Czech border and has changed hands so many times. It was sacked by the Swedes (they were a long way from home), later it was handed over to Austria, then handed back to Czechoslovakia, and later taken over by Germany in 1938 at the Munich agreement in an attempt of ‘Pace in our time’ – better know by the Czechs as the ‘Munich Betrayal’. Usti nad Labem was (is) part of the Sudetenland.

While stretching my legs (more like just standing still) in the corridor I noticed the next compartment was the Business Class compartment, with just four seats and plenty of room. Only after the occupiers of this compartment left the train, about three quarters of the way through the journey, did we spread out and take advantage of the extra space. You live an learn.

Our hotel reception area was a welcome sight after our journey, and very different. The giant fish tank was real, it was not a photograph. 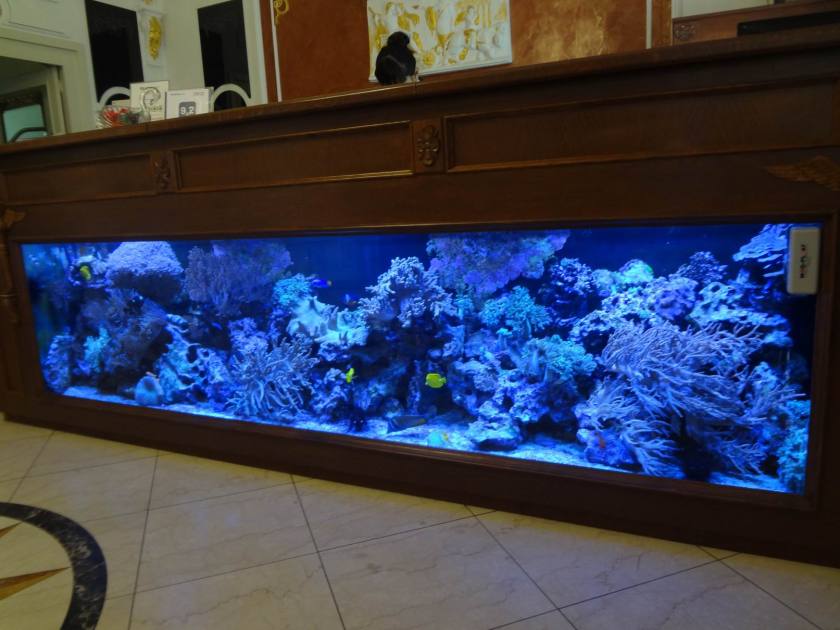