There’s not many boys who didn’t have an interest in trains at one time or another.

My interest started when I saved pocket money towards a Triang train set, and the love of trains has never left me – although my original train set did.

With grandchildren one can ‘remember’ to a certain extent when they allow you to play with Thomas the Tank Engine.  :-o)

Not so long ago the thought of a train holiday around Europe took hold.

Why not fly in to Frankfurt and then use the high speed trains to move from country to country at leisurely, stress free, and economical way.

The last time I traveled on a German train was in 1960, when,as a member of the YHA I was youth hosteling along the Rhine, so how to plan and buy tickets in 2013?

Some years earlier I’d come across a very interesting site called The Man in Seat 61 http://www.seat61.com/ so I clicked on this site for advice on creating a holiday for four using the rail system. The site had expanded greatly since my last visit.

After a little research I logged in to the German rail system http://www.bahn.com/i/view/overseas/en/index.shtml and bought four tickets from Frankfurt to Berlin. While buying the tickets I was also allowed to pick the seats that I wanted, and because there were four of us I wanted us to sit around a table. The booking system is very like the airline system.

I picked the departure time and paid for the tickets using my credit card, and printed out the tickets at home in Sydney – couldn’t have been easier.

We flew in to Frankfurt with Qatar Airlines and stayed at a local airport hotel for the night. A taxi, next morning, had us at the main Frankfurt railways station about forty five minutes before departure. Being First Class we had use of the lounge, which was nothing startling, but was OK for coffee and biscuits. We were called to board about ten minutes before departure so we were able to watch our train arrive in to Frankfurt station.

The train was an ICE train (Inter-city Express) which left Frankfurt dead on time. Would you expect anything else from a German train?

The seating in First Class is 1 x 2, and less crowded. There is nothing wrong with 2nd class, which is 2 x 2 seating, with similar leg room and comfort, but I wanted to travel 1st class by train, at least once in my life.

Using the ICE train, which traveled at up to 200 km per hour, the journey took us around four hours and was very pleasant.

We had four days in Berlin, which was long enough for a taste, but nowhere near long enough to experience Berlin life. 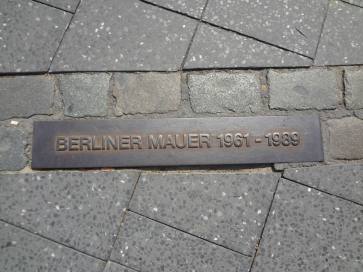 Indicator of the Berlin wall 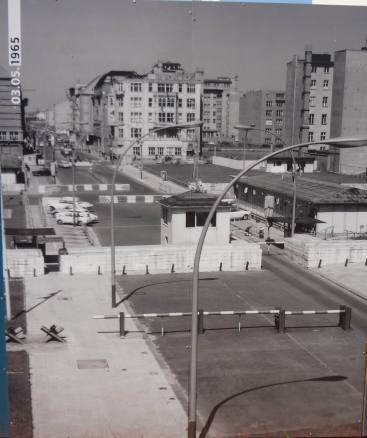 We visited a concentration camp, which is about 50 minutes by train outside Berlin – see next post.

After four nights we moved on to Prague, Czech Republic, again by train, but this time we used the Czech train system.