In the late 1980’s I used to visit various Pacific Islands on business (someone had to do it!).

On one trip I flew Sydney, Nauru, Tarawa (in Kiribati), Funafuti (Tuvalu), Suva (Fiji).
Kiribati – pronounced Kir-i-bahss – which is the Gilbertese for Gilbert Island, and Tuvalu is the new name of the Ellis Islands, as in Gilbert and Ellis Islands, which used to be a British protectorate until 1974 when they became the independent countries, Kiribati and Tuvalu, after they held a referendum.

I flew from Nauru on Air Nauru to Tarawa. 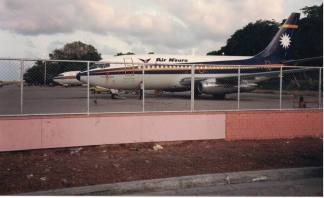 The parking of aircraft in Nauru was simple – leave them alongside the main road in a lay-by. The island is so isolated that security was ‘limited’ at that time. The traffic had to stop for the aircraft to cross the road to allow passengers to board.

Tarawa is the name of the main atoll of Kiribati and the capital on Tarawa is Betio. (pronounced ‘bay- she – oh’)

Tarawa is remember for some very heavy fighting by the Americans, against the Japanese during WW2, and the beach on which I walked still showed the remains of landing craft, small tanks or amtracs and pieces of aircraft, along with defensive pillboxes manned by the Japanese.

As I looked out over the 800 to 1200 yard coral reef, (see picture below) across which the troops had to fight their way ashore under withering machine gun fire, I could feel the ghosts of those brave men who died that November day in 1943.

The area of the Betio atoll, is three miles long by half a mile wide. 1,115 Americans were killed or listed as missing, and 2,234 were wounded. Of the 4700 Japanese troops defending the island only seventeen were captured, along with 129 Koreans. It was estimated that 4690 Japanese died defending this now forgotten part of the Pacific.

The Americans had to estimate how many troops were defending the atoll. The best guess was about 3100 men, which was reasonably accurate, considering that they were unable to send in reconnaissance units to obtain a more accurate number. The Americans realised from aerial photographs, that the Japanese built their latrines over water, in multi-holed wooden buildings. By counting the number of latrines they worked out the relationship between the number of backsides and to a latrine and estimated 3100 troops! 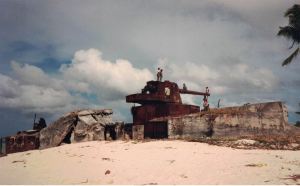 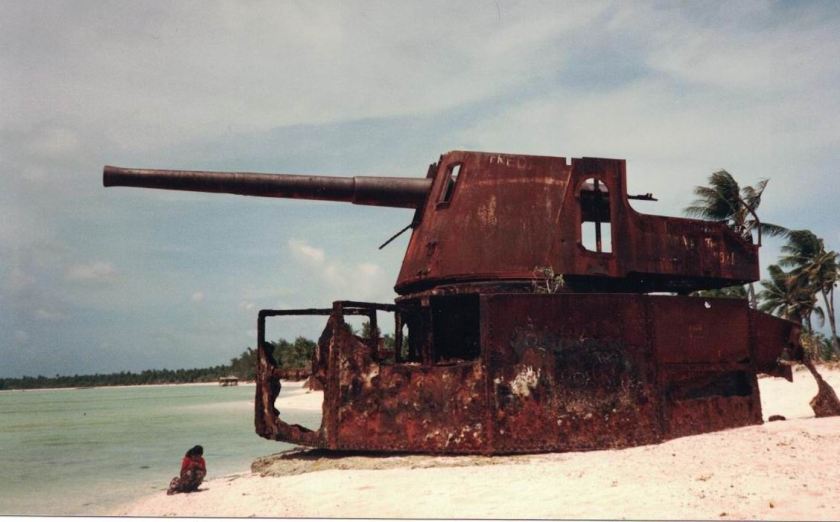 Defending the beach I saw eight inch guns still point out to sea. When I visited Betio I was told (not by locals) that the guns had been removed from Singapore, after the fall of that island, and transported to the Pacific to defend Tarawa. Later I read that the Imperial War Museum in London stated that Singapore didn’t have any eight inch guns for the Japanese to capture, so they couldn’t have been transferred to Tarawa from Singapore. They were in fact manufactured in Britain for a 1905 contract to supply eight inch and twelve inch guns to the Japanese navy. The Tarawa defensive guns appear to have been part of the 1905 contract.

The above pictures show the Japanese HQ building with shell a machine gun damage, which when I visited was being used a simple squash court. 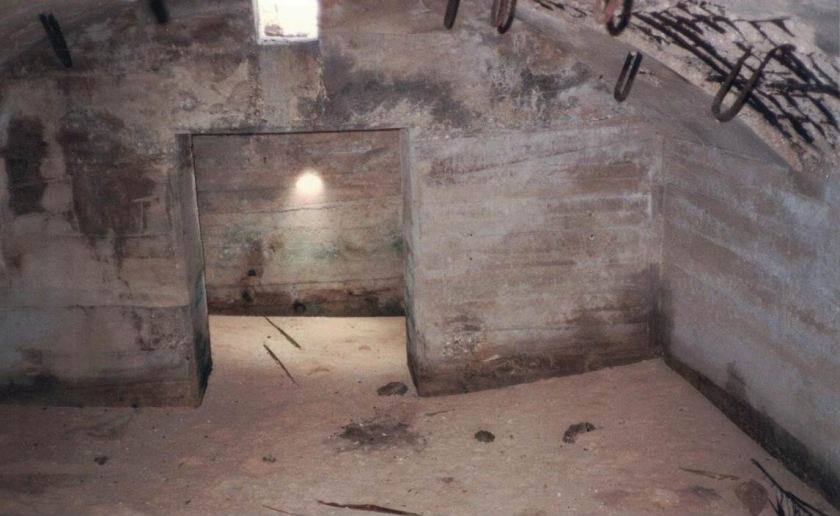 Inside another Japanese bunker.

The above shows what is left of a captured Japanese bomber strip, which allowed the Americans to carry the war to other islands.
The modern airport is about a twenty minute drive from this area.

The above picture is to show how shallow the soil is on Tarawa – this is a local grave yard. After the war the American causalities, from this battle, were laid to rest in the war cemetery in Hawaii.
The marking of the grave’s perimeter, in many cases, was often done by using empty glass bottles – beer bottles and soft drink bottles.

On completion of my business in Kiribati I flew to Funafuti the capital of Tuvalu with  Airline of the Marshall Islands. Quite a noisy trip.